The Sycamore Education Foundation (SEF) is proud to announce that three outstanding Sycamore High School alumni have been selected as the 2022 recipients of the Distinguished Alumni Award.

Since 2013, the Distinguished Alumni Awards have been presented annually to Sycamore High School alumni who have maintained a high standard of excellence and made a significant contribution in their fields of endeavor. This award is a tribute to graduates who have shown exceptional personal, community, and/or professional achievements. This year’s recipients include Bob Armstrong ’77, Lieutenant General (Ret) Ken Keen ’70, and Andrea Mitchell ’89. 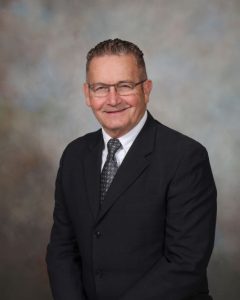 Bob Armstrong is known throughout the Sycamore community for his philanthropy and leadership. He devotes time and energy to countless hours of volunteering for organizations including Kiwanis Club of Sycamore (Past President), Sycamore United Way (Past Board Member), Sycamore Sports Boosters (Board Member), LIFE Missions (Board Member), YMCA, Sycamore Youth Baseball, Sycamore Youth Football, Sycamore Force Basketball, Sycamore Fury Basketball and Sycamore United Methodist Church.  Whether it’s coaching, serving on Boards for the many organizations who are the backbone of the community, inspiring youth to lift up people in need, or innovating the first pandemic-related Spartan face covering, Bob is a passionate advocate, mentor and fundraising guru for numerous educational, religious and youth sports not-for-profits.  He studied business at Northern Illinois University and continues to be a supporter and fan of Huskie Athletics.  Bob has spent his career in printing sales and service. He values the relationships he has with his clients, most of which are in the Sycamore-DeKalb area.  Bob lives in Sycamore with his wife, Tami (Remala) Armstrong, ‘88.  They have three children Gage, 21; Brody, 19; and Mallory, 17.

Lieutenant General (Ret) Ken Keen graduated from Sycamore High School, in Sycamore, Ill, in 1970. Following graduation from Eastern Kentucky University, as a distinguished military graduate, he was commissioned as a 2LT in the U.S Army Infantry in December 1974. LTG (Ret) Keen retired from active duty on 1 March 2013. 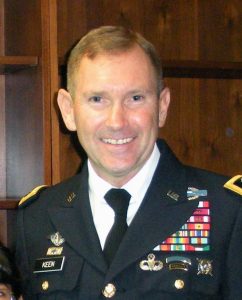 LTG (Ret) Keen is currently the Associate Dean of Leadership Development and a Senior Lecturer in Organization and Management for Emory University’s Goizueta Business School in Atlanta, Georgia. In this role, he manages a school-wide leadership development program and teaches leadership courses. This includes teaching a core leadership course for MBAs, a Leadership Fellows Course, a Leadership Capstone Course for selected graduating MBAs; crisis leadership seminars; and a team dynamics seminar for all MBA programs. He also coaches MBAs in the Goizueta Advanced Leadership Academy; coordinates and directs the participation of all MBAs through the Leadership Reaction Course at Fort Benning, Georgia; and is the faculty director for the Executive Education Managerial Leadership Program.

LTG (Ret) Keen served 38 years in the Army with over 11 years working and living abroad in the Republic of Panama, Brazil, Colombia, Haiti, Germany, Egypt, and Pakistan. Ken commanded a SCUBA detachment in 3rd Battalion, 7th Special Forces Group; a company and Battalion in the 82nd Airborne Division; Joint Task Force – Haiti following the Jan 2010 earthquake; as well as serving on three U.S. Embassy Country Teams leading all military forces in Colombia, Haiti, and Pakistan during crisis periods. He participated in Operation JUST CAUSE in 1989 as the Assistant S3 of the 75th Ranger Regiment; commanded a Ranger Task Force during Operation DESERT STORM in 1990, as part of a Joint Special Operations Command, while serving as the S3 of the 1st Ranger Battalion; was the Executive Officer and Commander of 1st Ranger Battalion; and was the 11th Colonel of the 75th Ranger Regiment from 1999 to 2001.

LTG (Ret) Keen is a graduate of the Brazilian Command and General Staff College, the University of Florida’s Master of Arts in Latin American Studies, and the Army War College.

LTG (Ret) Keen also serves on several non-profit Boards in support of military veterans, education, and international humanitarian organizations. Ken is the Chairman of the Board of Trustees for the U.S. Army War College; Board member on the Foundation for Atlanta Veterans Education and Research (FAVER) Board of Directors; Board member for the Witness to War Foundation; Board member of the Community Organized Relief Effort; on the Board of Advisors to the Kentucky Center for Veterans Studies at Eastern Kentucky University; Chairman of the Ranger Hall of Fame Board; and Honorary Colonel of the 75th Ranger Regiment.

LTG (Ret) Keen has been married to Mary Ellen Hume for over 47 years. They have a daughter, Marta Keen, and two sons Dr. Ryan Keen, Jonathan Keen, who is married to Jennifer Wu, a grandson, Jackson, and granddaughter, Juliana. 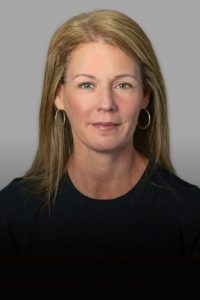 Andrea Mitchell is the Founder and Managing Partner of the Washington DC-based law firm Mitchell Sandler LLC – a majority women-owned and women-managed financial services law firm.  Andrea is a nationally recognized adviser to banks and other financial services companies.  She represents clients throughout the country on enforcement, regulatory, and compliance matters before the United States Department of Justice, Federal Trade Commission, Consumer Financial Protection Bureau, Department of Housing and Urban Development, federal and state banking regulators, and state attorneys general.  Andrea has been recognized by Chambers U.S.A., Best Lawyers, and Legal 500 and was named as a 2020 Housing Wire Woman of Influence.  She is also a Fellow in the American College of Consumer Financial Services Lawyers.  She received her B.A. from the University of Wisconsin-Madison and J.D. from the American University-Washington College of Law, summa cum laude.

This year’s honorees will be recognized prior to the start of the varsity homecoming football game on Friday, October 7, 2022.